After the Japanese earthquake, the designer “became preoccupied with the idea of disaster versus relief and man versus nature.” 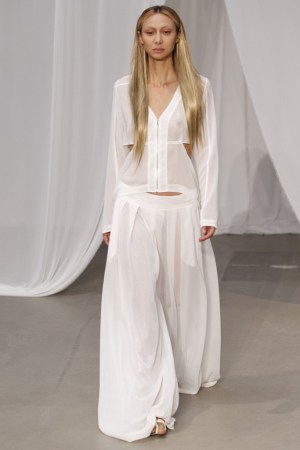 Kimberly Ovitz is proving herself a gutsy designer, her version of moody minimalism in stylistic counterpoint to the more obvious polish of many of her most prominent peers. After the Japanese earthquake, Ovitz “became preoccupied with the idea of disaster versus relief and man versus nature.” For her first runway show, she drew inspiration from Japanese architect Shigeru Ban, perhaps best known for his post-Kobe-earthquake housing structures, temporary dwellings constructed of impermanent materials such as paper and bamboo. The resulting lineup incorporated paper-thin knits and airy fabrics in shapes that were often, though not always, fluid, and as wearable as they were interesting in design. A classic cardigan, for example, played with degrees of transparency, making for a pseudo-graphic pattern, while the sides of a shirtdress were hoisted up to create a beautiful draped silhouette, and the sole print (of rusted metal) was placed on asymmetric silk dresses and skirts. While Ovitz admits to designing for girls with a dark perspective, her clothes have ample appeal beyond that core, delivered with subtle chic and a savvy shot of sex appeal.