West’s proposition for high-end streetwear was anchored mainly in leathers. 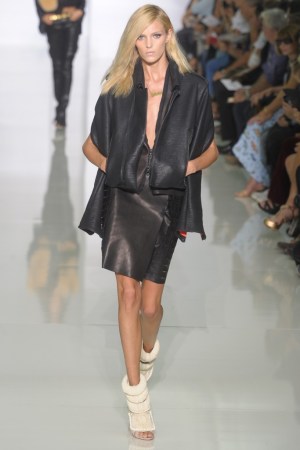 After years as a fixture on the show circuit, fashion’s self-professed ultimate fan boy, Kanye West, put his money where his mouth was. In a move that did not lack for hubris, he planted himself on the Paris schedule, staked out an opulent venue — the classically styled Lycée Henri IV — and veiled his production in a well-guarded hush. All the pent up curiosity was released Saturday night. Shown before a tightly edited crowd of top editors and a few celebrities, the collection turned out to be neither triumph nor train wreck.

West’s proposition for high-end streetwear was anchored mainly in leathers — cleavage and back-bearing dresses, jackets and pants done with motocross/space suit details, like ribbing and zippers. A white dress with a strip of a racer back and a pair of colorful leather pants were nice. But in general the leathers and cuts were too clunky. The rest of the collection cribbed from the work of the designers he admires, many of whom were sitting in the audience, and whose ranks he intends to join. Skin tight, slashed dresses and little sweatshirts were worn askance. There were gold nameplate necklaces and a giant fox fur backpack because West’s roots are in hip hop.

It had the earnest veneer of a beginner, which was sort of endearing. Less so was West’s refusal to do interviews leading up to the show. In this business, a little good will goes a long way. The following day at the Celine show, West said his design process was a team effort. “Every designer works with a team, it’s just different for me because I’m a celebrity. I’ve learned so much even in one day.”