On the runway, his aesthetic was distilled with absolute confidence, which is what distinguishes him from the Gothic monastics who have followed suit. 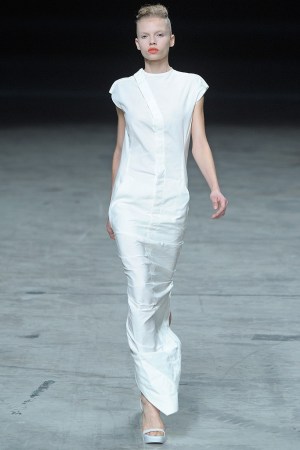 Sometimes what you see is what you get. “There’s no irony. It’s not particularly witty. There’s no menace. This time, it’s really pure, simple grace,” Rick Owens said during a preview the day before his spring show. Not that he has been known to play coy, but his thoughts were particularly astute. On the runway, his aesthetic was distilled with absolute confidence, which is what distinguishes him from the Gothic monastics who have followed suit. Owens believes in his look 100 percent.

Maximal in its austerity, the silhouette was founded on “pillar” skirts — long, slim columns in black, white and a terra-cotta tone, slit extra high in the back for maximum ambulatory effect. Owens said he liked the idea of presenting the head like a Brancusi sculpture, an effect achieved through broad tops with shapes similar to garment bags cut to accommodate arms and head. Others shirts were more fitted with slim sleeves and extreme bell cuffs. It was deliberately modest but the shapes, inspired by Sixties couture, were undeniably elegant. And as Owens said, wherever elegance is, sexuality isn’t far behind.

The twist came in the plain, basically utilitarian fabrics, such as cotton duck and leather, craftily worked into impressive graphic patchwork jackets. It brought the grandeur down to earth without losing impact. “I always resented the idea of radical silhouettes or exaggeration being confined to the runway,” Owens said. “That kind of extremity should be accessible all day long.”