In his show notes, Tomas Maier said he aimed for “clothes that blur the lines, that offer a more complex idea.” 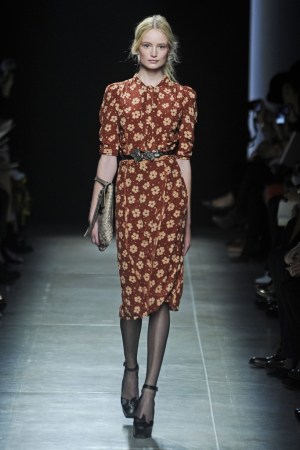 Sweet and tough. The tension between the two intrigues many designers, including Tomas Maier, who for spring offered his take on the theme with an impressive collection for Bottega Veneta.

In his show notes, the designer said he aimed for “clothes that blur the lines, that offer a more complex idea.”
He accomplished this, often with considerable dare, by working hard studs and glossy snakeskin inserts into feminine silhouettes. There were also whimsical spaghetti-string dresses in earthy rather than girly colors.
Maier opened with several terrific floral-patterned dresses in Thirties silhouettes. Executed in reds, soft pinks and blues, they had a nostalgic charm; those with butterfly belts were particularly lovely.

A group of sportier white looks read a little trickier, particularly the boxy embellished and embroidered poplin shirts with oversize sleeves paired with pencil skirts. While these felt heavy-handed, Maier countered that notion with his gorgeous final exits worked in an abstract flower motif that almost looked like scribbles; one silk version was bedecked in weighty black beading.

Bottega Veneta is still mainly a luxury leather goods house and Maier offered plenty of fabulous reminders: Some of the new Intrecciato bags were fringed and appeared shredded for a cool, unfinished feel, while others were adorned with butterfly appliqués. They were at once soft and hard — driving his point home perfectly.