The mood for Frida Giannini’s spring collection was at once spare and flamboyant, retro but not impossibly so. 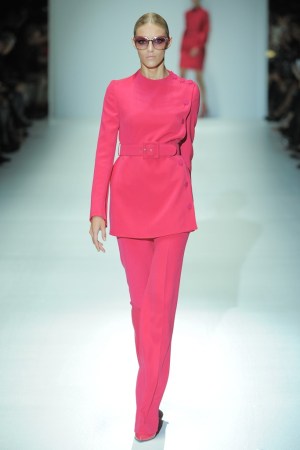 “Aristographic,” read the show notes. The word properly summed up Frida Giannini’s spring collection for Gucci. Before the show, she said she’d been inspired by Richard Avedon, specifically his portraits of such women as Marella Agnelli, Talitha Getty and Gloria Vanderbilt. She didn’t mention Yves Saint Laurent, whose influence appeared in vibrant colors; some lean, tailored day clothes, and the recurring motif of bold large-scale ruffles that defined the silhouette while providing the collection’s primary embellishment.

The mood was at once spare and flamboyant, retro but not impossibly so. That is, if women buy into the suggestion of a tunic over matching fluid pants, “a new pajama,” Giannini said. She showed it again and again, sometimes with abundant, tiered ruffles running down the sleeves, sometimes with cutout backs. The unfussy femininity made for a polished bridge between sportswear and a suit. And if the look rang a little too 1972 (or a little too loud: head-to-toe azalea) to take significant flight for day, it presented a distinctive way to dress for evening. By definition, a hyper-focused collection, as has become standard throughout fashion today, is lean on options, as proved the case here, though Giannini diversified a bit with a python jacquard (yea!) and a giant sea anemone print (nay). Her other evening option worked beautifully: linear but loosened columns — black, white and brights — that infused high glamour with confident ease.