Sander’s second homecoming was a strong but imperfect déjà debut featuring some lovely clothes, some unresolved issues and a knockout finish. 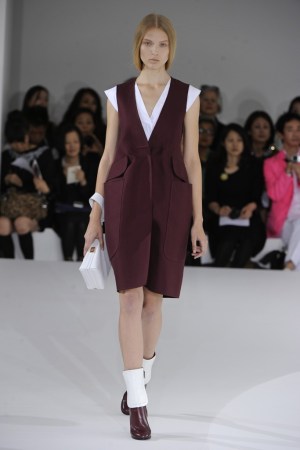 The Prodigal Son. Odysseus. Steve Jobs. Dorothy Gale. They all found their way home, and with it, a second chance, a notion that appeals to our better natures — in theory at least: We root for the homecoming to succeed.

On Saturday, Jil Sander’s second (or third) homecoming went public as she presented her first women’s collection in eight years for the house that bears her name but no longer her ownership. It was a strong but imperfect déjà debut featuring some lovely clothes, some unresolved issues and a knockout finish.

Just as she left back when, Sander returned with considerable emotion, a wellspring she hadn’t expected. “I had already [done] the men’s collection, and I thought, ‘I know now,’ ” she said after the show. “And so…I hope I get used to it again.”

For the audience, in some ways, Sander’s presence felt like old times, which is not a pejorative. One didn’t feel her eight-year absence when taking in the familiar elegance, the grace, the serenity; maybe it’s a kind of fashion muscle memory. She showed in the same calm manner of yore, in the pristine white of the company headquarters, no celebrities on hand, no additional fanfare.

What had been buzzed about was where Sander would step in fashionwise. Would she pick up where she left off with her iconic minimalism, or take it somewhere else, somewhere perhaps less obviously spare? Would she use this comeback season as the proverbial palate cleanser, purging the house of all things Raf before really pushing forward? Backstage, Sander seemed to acknowledge, albeit cryptically, that here was just a first step. “We gave you a little thing,” she said. “It was…maybe a handwriting to try to keep up with our time, you know?”

Keeping up with the time while staying true to him or herself — it’s the ultimate challenge for every designer. Sander must also distance herself from Simons’s remarkable last efforts for the house. This collection looked utterly modern, not a shred of the unintentional retro that can derail the renaissance train. Still, one felt her pressure to move forward, probably less from Simons than from the ultraspare, ultrapure perception (a true but incomplete one) that is her legacy.

Perhaps that’s why she put a good deal of focus on dresses, never her primary comfort zone. Working in structured fabrics in wine and navy, Sander cut almost everything with room, using spherical constructions and darting techniques to sculpt, round and extend shoulders, sleeves and hips. Some looks were great; some played a bit awkwardly as too obvious proposals for pushing minimalism forward. Not so the separates, for the most part ultrachic, particularly the coats and fabulous color-blocked sweaters worn with belted A-line skirts. Sander’s finale dazzled quietly, if that’s possible, with iridescent rubberized discs creating polka-dot delight on crisp white cottons.

All in all, a laudable comeback that answered at least one question and raised others. The show of bags and notice-me two-tone boots — ankle and knee versions — indicated the house’s determination to focus on and fix its problematic accessories business. Left unanswered, the question of where Jil Sander, designer and brand, fit in today’s fashionscape. Will the designer’s former customers, once the epitome of devotion, rush back? Were her voluminous dresses with their elliptical tricks intended to lure them, or to attract a new, perhaps younger customer? Too early to tell. As Jobs and others learned, you can indeed go home again, and flourish. But as countless college freshmen will find out this Columbus Day weekend, it might not be as easy at first as you’d hoped.