No stranger to exaggerated volume, Consuelo Castiglioni made it the focal point of a strong Marni collection. 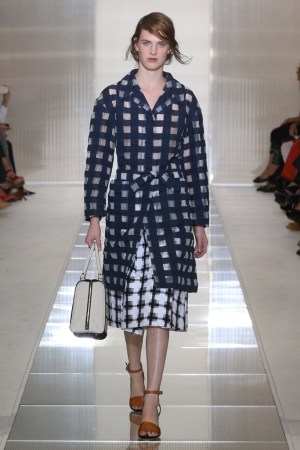 No stranger to exaggerated volume, Consuelo Castiglioni made it the focal point of a strong Marni collection. She delivered it with a delightful curveball, dialing back her charmingly cartoonish inclinations in favor of womanly refinement. “Sparseness as elegance,” read her show notes in reference to the simplicity of the lines and abundance of solids — a major deviation from Castiglioni’s norm — that showcased silhouette and fabric foremost.

On the sporty side, there were long-sleeve leather tunics cut wide in the arms and body and worn over shorts and A-line skirts. A sturdy architectural foundation to the look was evident, yet it was surprisingly soft. Shorts had rounded hems and full skirts came folded into thick pleats at the rear. The latter, worn under a peplum top managed to cut a feminine figure out of a load of fabric.

The big shapes were not the only story. Castiglioni didn’t pass on the bold patterns altogether — graphic windowpane checks made of transparent jacquard in the beginning of the show, and wild florals in animated colors toward the end. Plain black-and-white looks were interspersed throughout, their palate-cleansing purism made all the more appealing against the bold colors. The same went for the bags and shoes — simple envelope clutches and wedge sandals and pumps — cool, modernist compositions. Where there was surface decoration, it was restrained by Marni standards: The two knockout finale dresses, one a grand empire, the other done with a sculptural peplum, twinkled in shiny black jacquard.