For her spring collection, Miuccia Prada sought to reconcile two oppositional characteristics of womanhood: “toughness and the poetic part.” 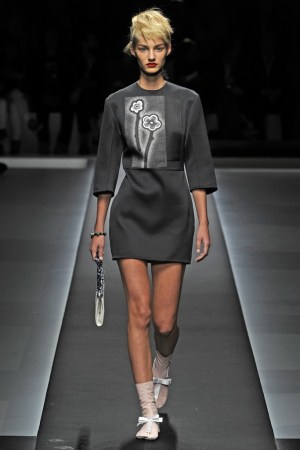 Power. Beauty. Sex. Fragility. Artifice. Over the years, Miuccia Prada has addressed them all on her runway. For her spring collection, she sought to reconcile two oppositional characteristics of womanhood: “toughness and the poetic part,” she explained backstage. “I tried to mix them together, because this is mainly what women have to deal with in reality. The clothes are the expression of this impossible dream.”

Fashion is the very stuff of dreams. We look to it to make dreams seem, in the transient moment, a little less impossible. It is also the stuff of commerce. No one plays one off the other more deftly or more brilliantly than Prada, a process that once again took her to that compelling point where clothes to ponder meet clothes to wear.

These clothes were neither overtly romantic nor wistful, the shapes stark to the point of severity. But the first look out, a short black dress, was emblazoned with an off-center panel decorated with two white long-stemmed flowers that looked drawn in chalk. They might have been an ode to Flower Power Pop or to a third-grade art class. Then followed a parade of similarly crafted suits, dresses, jackets over knee shorts, their printed and appliquéd flowers providing sweet counterpoint to the austere shapes. One saw references to traditional Japanese kimonos, hakamas and footwear, as well as hints of Prada’s ongoing fascination with lingerie. Color started to work its way in: a dark green coat, a lone navy dress, splashes of red, and then, full-on pastels, all icy pink, green and girly. Throughout, the flowers changed without losing their clarity: a single large medallion on the bodice of a dress; high-contrast graphics on remarkable fur coats and stoles. (One big-petaled bloom turned toward Rei Kawakubo.)

It all looked beautiful, unfussy and even sober at times, intended to fascinate its way beyond fashion chatter and into real life. Speaking of which, asked about the fur, Prada called it “a symbol of possibilities. So much is forbidden now. Dreams are forbidden, nostalgia is forbidden and to be too sweet — you can’t…” She couldn’t have missed the added resonance of the word forbidden when applied to fur. Provocation? Prada likes it ultrachic, intelligent and wearable, too.