While Wang holds fast to something quite specific — stripped-down street with an urgent attitude — he does not lack for inventive ways to handle it. 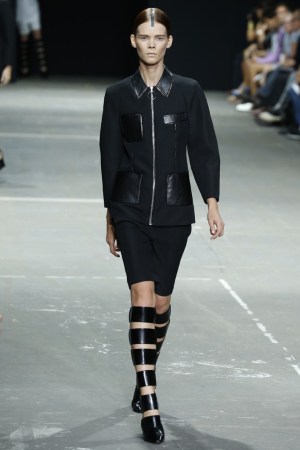 For the finale of Alexander Wang’s spring show, held Saturday evening at Pier 94, nine models, all acid blondes clad in ivory variations of looks that had already been shown, took their places along the cement runway. The lights went down, and the clothes, which were glow-in-the-dark, lit up. Then so did the crowd. It was a very cool ending to a collection known for being the epitome of cool. But more than merely engineered for the in crowd, the lineup was sophisticated and very smart. While Wang holds fast to something quite specific — stripped-down street with an urgent attitude — he does not lack for inventive ways to handle it.

The overarching impression left by the speed-of-light pace of the runway was one of sharp, minimalist sport. There were boxy “hockey jerseys” worn over tailored shorts — skinny and Bermuda styles — and some of the models wore lacquered porcelain helmets. Wang rarely strayed from black and white, and when he did, it wasn’t far — a few notes of beige leather and gray. The silhouette was more spare and crisp, in stark cotton and exotics, such as karung snakeskin, than previous iterations, yet nothing was plain.

During a preview a few days before the show, Wang said austerity was a focus when it came to structure and volume. “Then I wanted to start dissecting the pieces,” he said. “So we played with the idea of suspension and tension through embroidery techniques.” Garments were sliced up and tacked back together with a fishing-line type of thread, creating bare strips. Precise pieces of fabrics were cut out and sewn into the shape of a croc spine down the back of a shirt, which Wang likened to a graphic eyelet effect. One of the most interesting treatments was the bugle-bead embroidery done on the vertical, in a pattern that imitated crocodile skin in 3-D. Shoes were banded up to the knee, also hammering home the suspension-dissection motif. Styled up for the runway, even the most boyish cuts were charged with a racy undercurrent. The sexual energy surged like a live wire when it came to the curvy dresses, such as the silver embroidered V-neck dress with a slit up each thigh.