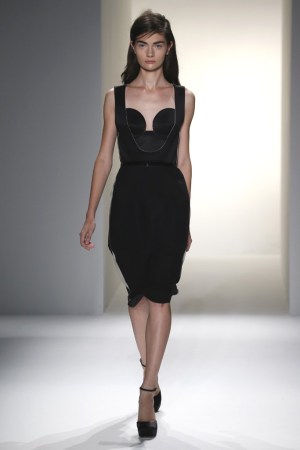 Bessette-Kennedy’s fashion sensibility could be seen in the designer’s artful tailoring, one of the hallmarks of her style during her brief moment in the public glare. He incorporated a more highly charged sexual dimension via several dresses and separates featuring cone bras and bustier tops, some in plain view, some peeking out from under filmy layerings. Costa referred to such looks as “very pinup.” Perhaps so, but they made for an ultramodern variation, with no trace of the traditional retro connotation. He also juxtaposed solid and transparent fabrics, including provocative, weblike moiré cages over strapless sheaths.

Costa is known for his architectural shapes, which typically swing more artful than sexy. Here, by framing his penchant for intricate cuts in a more sensual context, he pushed boldly into new territory, which is exactly what he intended. The results were compelling.