Taken at face value, the bulk was made up of artfully sexy clothes fit for the designer and her peers. 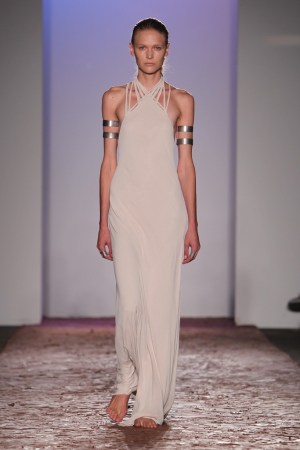 Kimberly Ovitz’s spring collection was based on the work of Kazakhstani performance artist Almagul Menlibayeva, who, as the designer explained backstage before her show, “provokes you to create your own mythology.” Don’t be deterred by the deep thoughts.

Ovitz beautifully translated her inspiration into a lineup that showcased the lighter side of her contemporary Goth aesthetic. Taken at face value, the bulk was made up of artfully sexy clothes fit for the designer and her peers. “I used the words ‘ritual’ and ‘nomadic’ when I was designing,” said Ovitz, who channeled her spiritual, harken-your-inner-goddess moment through whisper-thin layers of linen, shibori silks, georgette and chiffon cut on the bias and draped into gauzy tops, skirts and dresses that accentuated the body with an eye toward the raw.

The barefoot models — dressed in shades of nude, ice blue, stony gray and then a saturated emerald tone toward the show’s end — walked a soft clay runway. A good portion of the lineup was skintight, such as jersey dresses that clung and flashed skin through asymmetrical cutouts and superskinny spaghetti straps.

But Ovitz also addressed a certain level of modesty with loose, ethereal pieces, including great button-down shirts, striped skirts and easy pants. It was a complete wardrobe for the self-empowered urban nomad who still likes to be desired.