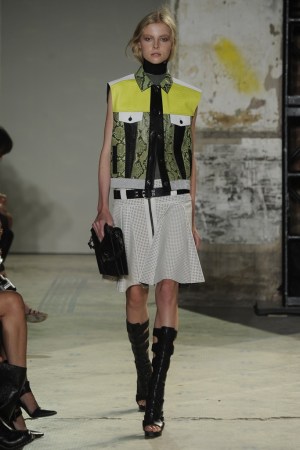 It’s been a big year for Lazaro Hernandez and Jack McCollough — new financing, new retail-business spirit guide, brand-new store smack in the prime of Madison Avenue real estate. The designers are not playing games, so to hear them invoke the word “randomness” as their spring message during a preview earlier this week was to know they had something very specific in mind. Indeed, “the Internet, the images you’re bombarded with and the collage of information that you get every day,” was how Hernandez defined it. The designers dove down that clickable rabbit hole and came out at the highest resolution, showcasing their coolest, newest, most “now” ideas. Let the superlatives rip.

Apropos of Internet culture, there was a digital quality to the clothes. High-def colors, neon green, electric blue and red, blared on laminated leathers, like a new patent, cut so thin and lightweight they were almost two-dimensional. Leather was everywhere — on boxy jackets, hip-slung pleated kilts and dresses that were fitted around the bodice and shoulders like a wet suit with a skirt that flared to the knee. Set on aggressive, knee-high gladiator sandals, there was a trace of the tribal surf collection from a few seasons ago.

Solid looks came precision perforated with pixel-like dots, but patchworks were the collection’s mainstay. Inspired by a Gerhard Richter exhibition they had seen in Paris, Hernandez and McCollough were keen on the notion of collage, first with bold combinations of skins — multicolored pieces of snake and iguana sewn up into one streamlined look — then with Internet-sourced photos. Pictures of a beach, a pool and a protest were spliced with vivid jacquards, satins and graphic woven techniques on dresses and separates. For the finale, the designers blew the photo prints out onto dresses that featured a uniform embroidery of bright buttons at the top and grommets at the skirt. It was a sharp, graphic and risky collection — with big returns.