The collection was all intensely worked, yet with the end result of a fabulous lightness that relinquished none of the strength of the Balenciaga woman. 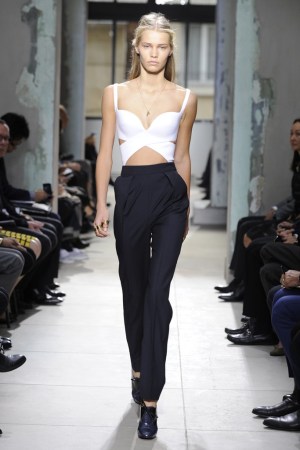 Nicolas Ghesquière resides in the more thoughtful reaches of the fashion landscape. That’s not to say he’s a designer of intellectual fashion (in the old days of WWD, that meant clothes for insiders that real people would hate) or that most designers work purely on instinct. Only that Ghesquière seems to ponder more than most. Or maybe he’s just more into discussing the nitty-gritty than most, talking past his thematic references to the intricate details of construction, willing to explain the exact purpose for this seam or that dart vis-à-vis the shape of the garment.

The fact that his knockout spring collection, though complicated in terms of cut and fabric development, looked more obviously accessible — simple, to use his own (inaccurate) word — than his fall lineup, with its cumbersome sweater shapes, could be mere seasonal fashion trope. More likely, it was the result of a determination to train the house codes — both his own and the founder’s — onto clothes that will beckon from the retail hanger,“Try me; I’m sexy!” That Ghesquière did so exquisitely while playing to the theme of antiquity, via Cocteau’s “Testament d’Orphée” with a soupçon of the sculptor Janine Janet (she worked on the film and moonlighted as the Rhoda Morgenstern of her day, doing major pieces for Balenciaga’s and others’ windows), while incorporating specific structural conceits from the archives, speaks to Ghesquière’s brilliance.

“An evocation of mythological drama,” Ghesquière said during a preview. He opened with a bright white bra top over slim black pants, sans vulgarity. He then moved into an exploration of static motion; with their voluptuous ruffled cascades, his black-and-white evening beauties combined the sensuality of skin-baring movement with the strength of substantial structure delivered in a sturdy silk blend bonded to toile. Togas looked like hanky-hemmed minis but were actually shorts. Tailoring came masculine — light-toned, strong-shouldered pantsuits — and feminine: a terrific modernist take on chichi in what looked like tweeds but were actually multilayered embroideries. Another remarkable fabric: colorful, leafy guipure embroidered with a vinelike motif; from even a short distance, one might mistake it for leather. It was all intensely worked, yet with the end result of a fabulous lightness that relinquished none of the strength of the Balenciaga woman — accessible high chic of the highest order.