Karl Lagerfeld is not a linear thinker, and this season offered a symphony of fabulous clothes in a collection packed with ideas. 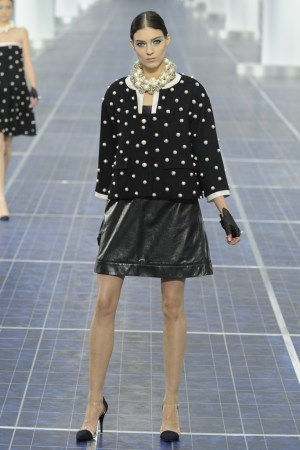 One needn’t be Margaret Mead to observe that Chanel has what all of its competitors want: a brilliantly talented designer who fuels the global machine via simultaneously pushing the house codes and advancing fashion. All while creating an aura of chic that resonates across generations, and whose stated dedication to that role is matched by a ferocious work ethic — over the long haul. Should that be so hard to find in a job candidate?

Situation after situation says yes — at least when it comes to longevity, which, in the case of Karl Lagerfeld at Chanel, has secured the house’s position at the pinnacle of fashion for decades. Lagerfeld is approaching his 30th anniversary at the house, a designer-as-employee tenure exceeded only by Lagerfeld at Fendi. The next closest is Marc Jacobs, 15 years at Louis Vuitton.

Lagerfeld’s ongoing lights-out success at Chanel is first and foremost about the man’s genius. Let’s put that in the corner for a moment. His capacity for work is unparalleled, though it’s difficult to imagine any designer achieving any level of success today without working like a dog; fashion is not a figurehead-friendly arena. Still, Lagerfeld proceeds differently than some more recently ascendant employee-designers. His ability to refresh without convulsive reinvention may make him fashion’s ultimate modernist. But he’s got some pretty old-school ideas about the workplace. When it comes to his collections, thematic secrecy? No. Preview? No problem. Sound bite? He’ll give you 30. Banishing longtime front-row types to the second row, or disinviting those who have written ill of him? Nope.

As for the bigger picture, though no one would accuse Lagerfeld of ego deficiency, neither can he be accused of feigned artistic deportment or diva behavior. Lagerfeld would argue that his ongoing success in the job — the result of years and years of tireless work — has shaped his reputation, rather than the other way around. “Lots of class but working class,” he loves to say, and that notion informs his conduct 100 percent. Which does not mean there’s only one way of finding long-term success in fashion. But while numerous younger designers have basked in (sometimes extended) moments of great fanfare and then moved on, either by self- or employer decree, the Chanel-Lagerfeld model remains the industry’s undisputed gold standard.

And not because the man fancies being one-upped. In this season of debut madness, did anyone expect that Lagerfeld wouldn’t amp up the energy? He did so quite literally, installing 13 giant white, modernist wind turbines across a vast stretch in the Grand Palais. “We ordered 20,” he said in a preview. “We don’t know what we need until we’re there.” The turbines stood on a floor of watery-toned solar panels, the soothing blue and white of it all perhaps flagging a take on minimalism? Not quite. Within Lagerfeld’s recently redesigned studio on Rue Cambon (parquet floors doused in hammered white gold) the working title was “Neo Coco.”

To wit, there was a paring down, with not a braid trim nor brass-rimmed button in sight. “It’s nothing [to do] with minimalist,” Lagerfeld said. “But suddenly, we had the mood of clean. And fresh, light, but not shapeless. It’s about proportion, different volumes. For me, it’s completely refreshed.”

All true, but hardly in a one-note manner. Lagerfeld is not a linear thinker, and here offered a symphony of fabulous clothes in a collection packed with ideas — so many at such a clip, it was hard to sit there and keep up. Still, one could extract themes: wide-cut jackets stopping just under the bust over lean underpinnings; “skirt-dresses” (they looked like hiked-up skirts but were corseted underneath); cotton techno-weave fabrics; multipastel ribbon knits; random shots of color; massive pearl necklaces, and what he called “3-D prints,” actually embroideries of plastic petal flowers on white columns or colorful organza pinwheels on black froth.

As promised, there was ample proportion diversity, from don’t-eat-a-grape-in-those pants to cabochon-studded suits that strolled chicly toward the size-8 comfort zone. Lagerfeld’s enthusiasm for such range, and his ability to realize it so masterfully, is part of what makes his Chanel the phenomenon it is.