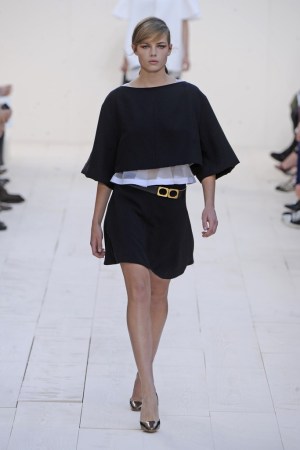 There’s a big anniversary — 60 years — going on at Chloé, one that called for a splashy retrospective exhibition at the Palais de Tokyo, the anchor of which is the work of someone with the last name Lagerfeld. Clare Waight Keller must have felt pressure to raise the stakes this season, perhaps inciting her to open her press notes with this disclaimer of a c’est la vie quote from house founder Gaby Aghion: “I don’t explain anything, I have lived…I live the life I wanted.” Keller didn’t need to hedge — her lineup was quite strong.

When she accepted the job, Chloé’s recent designer-retention record was spotty, which could have been why her collections were safe and a bit shy. She got assertive for spring, going big on sportswear in bold shapes and crisp colors that kept up with the season’s current talking points — Bermuda shorts; boxy cropped tops with rounded volume; a subtle Asian manifestation. One of the best looks was an optic white top with oversize sleeves that were cut off and tied back on with crisp white bows. Worn with the neatly tailored white shorts of a tennis pro, the outfit captured the house’s sporty-feminine duality.

Not everything was perfect — a few of the frills and daisy appliqués that glanced back to the Phoebe Philo years were too sweet. But a white A-line dress with an exaggerated painter’s ruffle around the neck had great structure and weight. Keller tweaked the cocktail-dress-over-pants look (that’s also been on these runways), showing the finale of tulle pinafore dresses with pleated ruffles over tailored shorts. It was fresh and discreet and will work just as well the traditional way — with a slip instead of shorts.