The brilliant fall Comme des Garçons collection that the fashion cognoscenti went mad for, well, Rei Kawakubo threw it on the scrap heap. 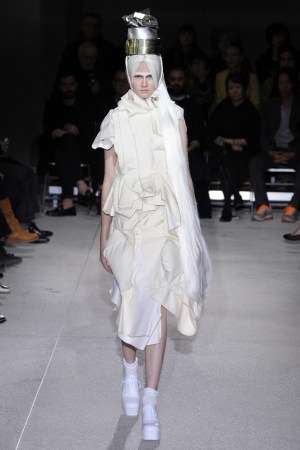 For every action, an equal and opposite reaction, no? The brilliant fall Comme des Garçons collection that the fashion cognoscenti — as well as lovers of all things bright and bold in general — went mad for, well, Rei Kawakubo threw it on the scrap heap. In doing so, she multiplied last season’s deliberate two dimensions by three, four or 10. The new stuff was still well within the classic Comme des Garçons range, wonderfully weird in a familiar bunched-up, blobby way.

Starting from the top — the sculptural headgear looked like scrap metal crudely fashioned into hats. It brought to mind the work of John Chamberlain, whose automobile sculptures were shown at the Guggenheim in New York earlier this year. The models wore long, white wigs and asymmetric garments that seemed crumpled, rumpled and sewn up all over to give the impression of compression. The multidimensional stitchwork looked completely random but, given the precision Kawakubo is known for, was probably the work of some masochistic patternmakers. For the most part devoid of color, the show started off in a plain, bleached-out muslin — essentially practice material — before moving into black. Shots of red and blue velvet appeared sparingly.

It provoked and amused. The initial blanche portion of the show was paced at a torturous crawl. With nerves fraying and patience wearing thin, out came the dark stuff practically at a jog. Then it was back to slow motion for the finale, which was fantastic. The models appeared to have taken armfuls of coats and Victorian garb and strapped them around their bodies with two optic white bands. lt made you think of hoarders or a beginner seamstress’ unrestrained experimentation with raw materials. “Crush. Energy explosion,” was Kawakubo’s three-word decryption backstage after the show.