Riccardo Tisci delivered the kind of fashion one hopes to see in Paris: confident, modern and, yes, chic. 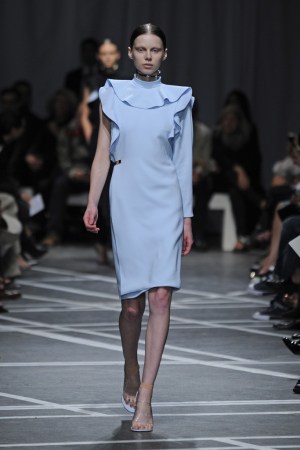 Throughout the Paris season, no one has stopped talking about the two collections that, as of 8:30 Monday night, will have bookended the weekend with major, monumental news. On Sunday, Riccardo Tisci interrupted that conversation with his spring Givenchy show, which delivered the kind of fashion one hopes to see in Paris: confident, modern and, yes, chic.

The Givenchy of today has little in common with that of its founder, whose work Tisci usually references on the sly. This time he was more public about turning to the archive, specifically Sixties couture, its grand fabrics — radzimir, taffeta, moiré, duchesse satin — and sculptural ruffles repurposed for Tisci’s Gothic glamour. Neoclassicism and traditional nun habits were also on the inspiration menu, so he set a ceremonial tone with live organ music by Mathias Lecomte and DJ Disco Dromo.

The show opened with a powder-blue dress and mock turtleneck, one sleeve and a soft ruffle framing the shoulders and body — a graceful and soft update of a staple couture effect that Tisci used throughout the lineup. The main colors were black and white with a few touches of baby blue and blush with silver and gold accents, the latter in accessories. Collars were key, and when they weren’t part of the garment, they were emphasized with thick metal chokers. Tisci’s priestesses of high style were mostly evening-bound in slim silhouettes, which ranged from column gowns with striking, exposed backs to the tri-layered pieces for which the designer is known.

Savvy in his approach to signatures, Tisci blends them into the specifics of the season so as not to dilute the new look with familiarity. A bomber jacket was romanced and renewed as a blouson in bias-cut lace. One black double-breasted jacket had rounded sleeves that were slashed open to create what looked like two petals, lined in contrast satin folded back like a wing. That’s how you bring a light touch to Sixties couture.