A David Hockney exhibition at the Royal Academy of Arts in London was a reigning influence for the designer this season. 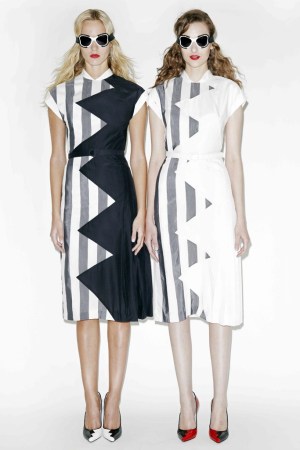 After canceling her New York show originally scheduled for Sept. 13, L’Wren Scott resurfaced at the tail end of the Paris circuit, taking appointments in her Ile Saint-Louis showroom. In many ways, the private format benefits a designer like Scott, whose very specific, consistent aesthetic is not about overstatement but impeccable, salable polish and special details that don’t necessarily get picked up at a distance.

The clothes were meticulously finished — a white leather bomber jacket was lined in charcoal-and-white striped cotton, the same pattern of the shirt under it. “You know I love a good matching set,” said Scott, who is adding sunglasses, done with Menrad, to her coordinated offer for spring.

A David Hockney exhibition at the Royal Academy of Arts in London was a reigning influence this season. Scott adopted his intense colors — calling them “Hockney blue” and “Fire red” — for her shrunken cardigans and some nicer summer cotton tweeds. But it was the black-and-white graphic styles, such as her signature Headmistress dress with an interlocking diamond motif across the chest, that stood out as the most crisp and current on the showroom racks.