The result was elegant, as Prada intended, an interesting fusion of conventional chic and something alluringly raw. 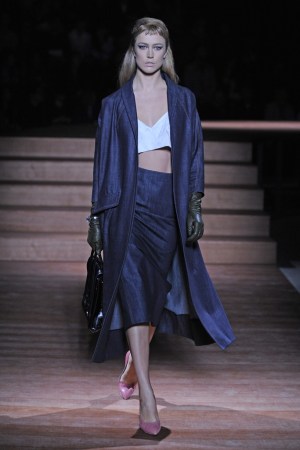 The classic femininity belonging to the generation that came before her is a constant touchstone for Miuccia Prada, who routinely shapes her Prada collection around Fifties and Sixties silhouettes. This time, they took the stage at Miu Miu, where the models wore the trappings of proper attire — jackets cut with Sixties couture volume, fur stoles, jewelry, pointy pumps, long gloves with a three-quarter sleeve — their polish disrupted by a host of counterintuitive treatments.

“It’s elegance done a different way,” Prada said after the show. “It’s about elegance, not elegance. Couture, not couture. Tailoring, not tailoring.” She called it a dialogue, presumably between the traditional notions of refinement and poise that the couture cuts represent and their opposites: the casual, the bohemian and subversive.

The show opened with denim in the chicest, darkest wash possible but still a surprise to see on pencil skirts and ladylike jackets. The baseline silhouette was a slim skirt or dress with a long jacket cut with chic unorthodoxy in mind. There were rumpled fabrics with raw strokes of white, red or black. Furs could have been hit with a can of spray paint — albeit, artfully — and shiny fabrics looked like vinyl. On the accessories level, some of the “ladies” wore their finery with flat gladiator sandals with oversize jewel embellishments.

The result was elegant, as Prada intended, an interesting fusion of conventional chic and something alluringly raw. Yet the impact was not as piercing as some of her recent tightly wound collections, such as last season’s retro pantsuit parade. Perhaps it was a matter of pacing, and casting the runway intentionally in murky light. Thick velvet curtains were drawn at the start of the show, cloaking the wood runway in a dim after-hours haze.