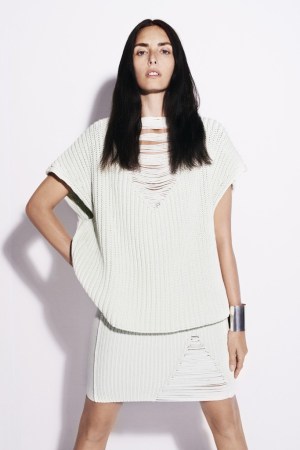 April Crichton presented her final collection for Sonia Rykiel before artistic director Geraldo da Conceicao arrives in October. Crichton, who worked alongside Rykiel for two decades, turned to Kate Bush as the season’s muse, a theme she executed with a romantic touch.

Rykiel is best known for knits, and Crichton offered plenty, in lovely pastel hues, including a chunky pink poncho and a “Cadillac green” top and skirt, which had a striking string detail. The designer also amped up the bohemian feel via quilted sweaters, a patchwork dress in various muted artisanal patterns and a brown coat and top in a material that resembled raffia.

Several fluid dresses, along with the crinkled silk chiffon numbers done in a cool flower print, added to the lineup’s hippie spirit.