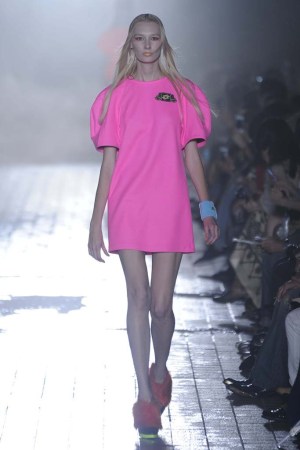 This season’s highly anticipated Dresscamp show marked the return of the brand’s founding designer, Toshikazu Iwaya, who left in 2008 and ushered in a period of inconsistency. London-based designer Marjan Pejoski — of Bjork’s swan dress fame — took the helm, followed by a design team with no clear leader. Iwaya’s return produced a colorful, energetic take on athletic clothing, including neon pink and orange track dresses and varsity jackets with metallic fringed sleeves. There were several of the brand’s trademark gaudy prints, ranging from geometric to Baroque motifs in shades of pink, orange, aqua and yellow. Hemlines were either very short or calf-length, with straight columns or flouncy silhouettes. The men’s offering used the same themes, but saw them appear in the form of tracksuits, slitted sweatpants and shorts that hit just above the knee.