The designer delved deeper into the conceptual minimalism he’s been developing for the past few seasons. 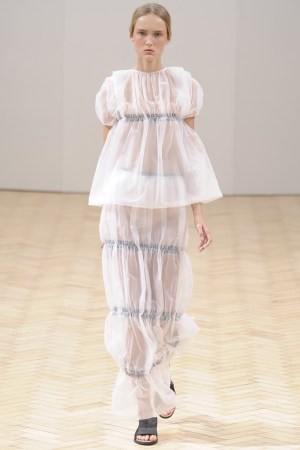 What with his Versus collaboration last spring and reported interest from luxury giant LVMH, Jonathan Anderson has seen his fashion profile skyrocket. His spring collection delivered on his reputation as London’s new-ideas man. Anderson delved deeper into the conceptual minimalism he’s been developing for the past few seasons, here with a pronounced influence from the Comme des Garçons family.

He started with the relatively feminine: sheer baby-doll tops and long skirts — one white, one black — that were banded to create soft tiers of blouson pleating. From there, Anderson built “textural landscapes” that teased the eye.

“Is it leather, is it silk, is it organza? ” he asked backstage. In fact, all of those fabrics made appearances, as well as nylon and pleather. They were sculpted into 3-D chevron pleats and puckers on stiff tops and wrap skirts that were short in back, long in front. The more engineered fabrics had a DIY finish to them. (After all, Anderson doesn’t have luxury conglomerate support yet.)

There were great moments of strange beauty, often quite wearable, too. A seersucker column gown with an exaggerated obi belt was striking, and printed sequin skirts were pretty. Everything was worn with leather shower sandals — the sensible shoe of the season.