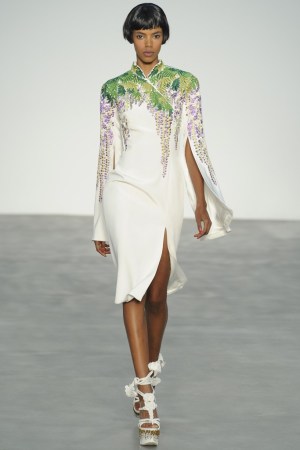 A merger of two very distinct aesthetics, the collection fused 16th-century Japanese robes with L’Wren Scott’s own exacting style of dress. Titled “Tagasode,” meaning “Whose Sleeves?” in Japanese, the collection’s origin was a Momoyama-period screen decorated with kimonos, which was considered a sort of makeshift fashion show for the women of the time, Scott explained during a preview.

Choosing such a culturally specific style offers the opportunity for inventive updates on traditional motifs — Japanese florals, structured silhouettes, in this case — and the risk of too-literal interpretations, such as costumes. For the most part, Scott stayed in the former camp, working the kimono effects with relative subtlety on clean, crisp day looks before developing them into grand gestures.

There was an obvious focus on sleeves. They came slashed open on a white dress with elaborate wisteria embroidery and on tidy tailored jackets. The simpler the silhouette, the better it fused with the Eastern details. So the pretty obi belts and colorful thread work on Scott’s signature strict dresses and some more relaxed styles felt the most modern.

The show ended with theatrical drama, including a fetish-y black-and-red boudoir motif, and a lean white gown elaborately embroidered with floor-sweeping sleeves. An example of impeccable workmanship, it was also nearly impossible to imagine off the runway. Then there was a fetish of a different sort: the shoes done with Brian Atwood. The lacquered sculpted platforms that wrapped up the ankles put the models at Scott’s flat-footed height of 6 feet, 3 inches.

“I wanted all the models to be taller than me,” she said.