The designer conjured a Forties-era seaside resort with his whimsical collection, updating vintage silhouettes with a recurring swimmers motif. 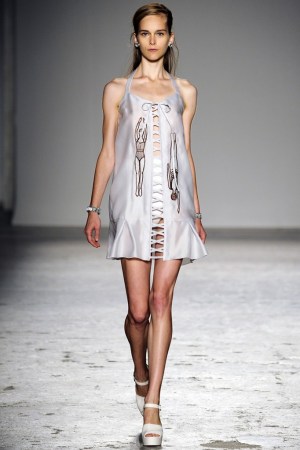 Divers in various states of spin were printed on a light-blue brocade dress, while a smaller version of the same pattern showed up on a cream button-front tea dress.

Later shown in dancer-like poses, the bathing beauties appeared as a pattern shaved into an azure cropped fur jacket with three-quarter length sleeves.

The theme also extended to the more contemporary designs that opened the show. Done in a feather-light glazed fabric, the separates — crisp dresses, tops, shorts and a skirt — featured swimmers embroidered in red or maroon thread, as well as crisscross ribbons inset at the waist, neck and hips.