Miuccia Prada celebrated a new-age power woman who wears her audacity and feminine strength more as beacon than armor. 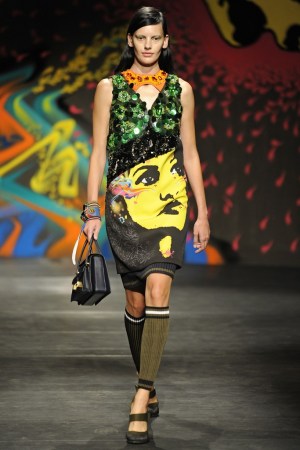 In an explosion of guts and sartorial glory, Miuccia Prada celebrated a new-age power woman who wears her audacity and feminine strength more as beacon than armor. The designer made the collection she showed on Thursday deliberately jarring as suited her admitted political agenda. It was fabulous.

“I’m fixated with the idea of women of strength,” Prada said after the show. “There is a necessity to be strong, visible, fighters, and this is an encouragement to be out there and to do something.

“It’s absurd, against the rules; it’s a happy collection,” she continued. “You need to be fighting. It’s about a debate about women; it’s a political discourse: ‘I’m allowed to do whatever I want to do with clothes.’ If they see you, they listen.”

Whatever the lady wants indeed. In this case, she wanted and delivered tons. Prada showed in her usual venue, the space now transformed by huge murals (inspired by Diego Rivera and other Mexican muralists) of women’s portraits commissioned from six contemporary artists. She imposed no constraints on the artists other than “an active, strong woman.”

See a Slideshow of the Runway Murals Here >>

Originally, she didn’t want to re-create the images on the clothes — too obvious. Nor would she allow the paintings (or their political motivation) to trump her fashion — not a chance. “Art did not change the design. I speak with my rules as a professional designer,” she said.

To wit, here was a remarkable oddity of overstatement and control (one that made minimalism feel, in the moment at least, so Nineties). The portraiture provided the primary leitmotif — big, bold, colorful faces on dresses, coats and skirts. They came printed, jeweled and in fur intarsias, merged with high-gloss, demonstrative embroideries, colorblocking and intricate cuts.

Prada’s “I am woman” proclamation showed up overtly in an emphasis on the bosom: keyholes cut into bright, solid shifts bedecked with chunky embroideries; intensely jeweled external bras, including a pair positioned to look like Boudica headdresses on two of the portraits.

Sports references continued the message of strength; the girls wore striped legwarmers and, sometimes, Prada’s take on Tevas. (The second such take this season; one more sighting, and will this most unsexy of shoes become a cool-girl trend?)

It all pulsed with vibrant tension and fearlessness of the most compelling kind — the kind with extreme talent backing up the bravado.