The designer said he was feeling “very elemental” for spring. 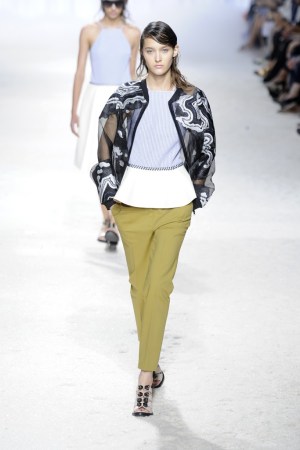 Phillip Lim said he was feeling “very elemental” for spring. Same goes for anyone wearing sandals at his show, where the entire floor was covered in very elemental white rocks. Ouch!

He wanted to convey a terrestrial sensibility in the collection, an ode to planet Earth via a mineral palette and decorative effects such as jacquards meant to emulate wood grain and geodes. The latter brought welcome surface interest and color to shapes that were otherwise very spare and structured.

Boxy jackets had jutting kimono sleeves, and vests, shirts and cuffed pants were cut sharp and wide, making for solid urban basics. There were cool treatments, such as the murky metallic finish of a cracked suede vest, and a futuristic white leather shift trimmed with Western fringe at the shoulders.

But often the stark silhouettes and the would-be hippie attitude of psychedelic patterns and crafty details were at a standoff, with the stiff stuff ultimately overpowering. A little relaxation was in order.