The street attitude, supermodels, and music scene of the Nineties were again a major influence on Alexander Wang's aesthetic for spring. 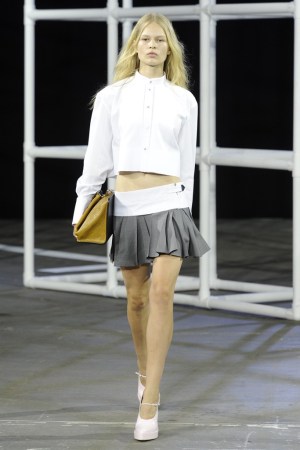 Alexander Wang has never been shy about his love for the Nineties; its gritty black-and-white minimalism, street attitude, supermodels, and definitely its music scene have been a major influence on his aesthetic, and were again for spring.

It was written all over it, quite literally. We’re talking about logomania. “I grew up in the Nineties when everything was about blatant advertising,” said Wang during a preview. “So I said, ‘How do we take that and do it in our way?’” By using his own name, for starters.

He worked it into laser-cut leather jumpers and slipdresses cut out of skinny leather strips sewn together vertically. It blared from the thick elastic waistbands of cutout dresses, and blended subtly into tonal houndstooth-inspired patterns on crisp shirts. Handled with equal parts irony and sophistication (the latter most evident in delicate white lasered lace tops), Wang pulled the logo thing off, backing up the audacity with serious design.

There was precision, technique and fabric development to everything, none of which he took too seriously, a point crucial to his cause.

“I wanted to do something fun,” said Wang. “Something with wit, with humor.” Adding pink to his typically stark palette was one great way of injecting his lineup with a playful sexiness. There were pink leather bags, shiny pink cartoon Mary Janes and excellent riffs on classic pink (and baby blue) men’s shirting, cut into pleated miniskirts and spare tops that were plain in front and open in the back with a tease of flesh. There was also a big homage to Nineties hip-hop style in the denim-inspired jackets and pants that bore the bells and whistles of designer finishings, as well as the white contrast stitching that harkened back to the jeans of that time.

Just before the show started, a few Aaliyah songs played on the soundtrack. A quick Google Image search of the doomed R&B star produces photos from a Tommy Hilfiger ad in which she’s wearing a bandeau top, and jeans belted low on her hips to show the men’s boxer briefs she has on underneath — every item emblazoned with Tommy logos. Wang incorporated all of these elements into his look in an updated, authentic way and made it fun. He can save the more serious stuff for Balenciaga.