The designer's show notes described her spring collection as “a mix of quiet calm and joie de vivre.” 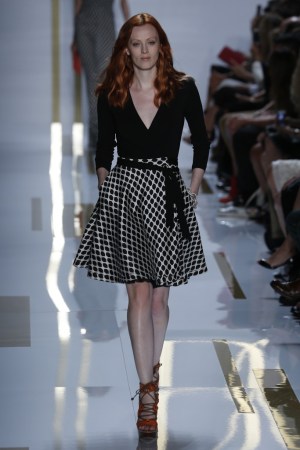 DVF’s show notes described her spring collection as “a mix of quiet calm and joie de vivre.” Certainly she wasn’t talking about the nightmare getting into the travesty that the Lincoln Center venue has become. Luckily, von Furstenberg’s show itself fared better with terrific music (Robin Thicke’s “Blurred Lines” and Daft Punk’s “Get Lucky”), a celebrity-heavy front row with Andy Cohen and Janice Dickinson shimmying to the tunes, and the most star-studded model lineup so far this season, including Jourdan Dunn, Joan Smalls, Karlie Kloss, Karen Elson and Naomi Campbell, who closed the show.

Although the collection was called Oasis, the clothes exuded upbeat energy. Von Furstenberg honed in on her DNA with sharp focus, delivering colorful ensembles and confident prints, an evocative African-inspired lion landscape among them. She used the motif on a chic skirt teamed with a deep-blue blouse as well as a T-shirt dress that she also wore for her runway bow.

There were plenty of other safari references, but the lineup wasn’t just about exotic adventures. The solid looks provided ample chic, especially the linear white dress with red rope halters and the fresh combination of black lace with denim for a new version of the wrap dress worn over a petticoat for volume and charm.