For spring, fashion’s most flagrant card-carrying optimist is feeling for romance. 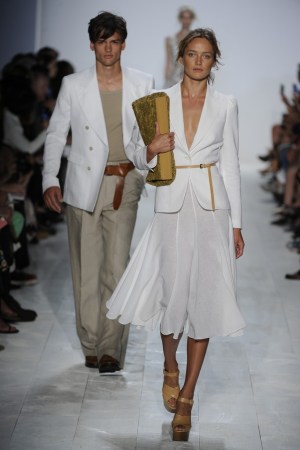 “I’m a little over edge, over nastiness,” Michael Kors said during a preview, as if nasty land were ever his turf in the first place. For spring, fashion’s most flagrant card-carrying optimist (just because things really go your way sometimes doesn’t make you less of an optimist) is feeling for romance. Wisely, he made it neither cloying nor kitsch, instead channeling his inclinations through well-considered counterpoints. “I got intrigued by the idea of convergence,” he said. “Forties and Seventies. Romantic but tailored. Casual but polished. All that yin and yang.” He made a significant omission in the litany — polished but plenty sexy — which added up to the chicest of palpitations.

Along the way, Kors worked ample references, from American prairie style to the diva-ready sportswear for which he’s known — think Lauren Hutton befriending Barbara Stanwyck, the former in a gray sweatshirt and trousers, a golden sable “ring” wrapping her shoulders; the latter in a divine full-skirted floral dress. A key juxtaposition — and a brilliant move — was to jettison certain natural motifs beyond their expected crunchy-granola habitat: hemp embroidery on a linen pencil skirt; lowly chambray repurposed into a glorious appliquéd lace dress.

It was with his dresses and jackets with manageably strong shoulders that Kors referenced the Forties most clearly. But he offered alternatives to tailoring in the form of spectacular knits, including a dreamy hand-crocheted cardigan and matching dress, and a slouchy cardigan worn over a tank and skirt — as unassuming as it was divine. And for the girl who prefers to wear her casual mien with a little sass: a white fox ring over a cotton boy shirt and shorts.

Throughout, Kors made savvy use of details, whether placing studs on a crepe dress for a snippet of toughness, or giant, hand-embroidered daisies to a pinup-worthy swimsuit. It all had a lightness that added to the collection’s spirit, as did the soundtrack that included a sampling of Cass Elliot’s lovely “Dream a Little Dream of Me.”