Rebels with a cause. The designer made such a statement in her show notes. 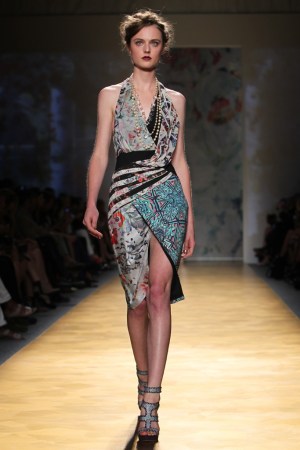 Rebels with a cause. Nicole Miller made such a statement in her show notes, referencing, in part, gardens, mazes, chandeliers and shattered mirrors, as if a rowdy group trespassed the gardens of Versailles to break into the famed palace. Miller translated that notion with a pretty riff on florals in all varieties, along with ample textural play and surface embellishments that, while often heavily applied, never overpowered.

The designer’s fresh take on flowers included a faded pattern on a leather moto jacket which she showed with a T-shirt in a filigree motif, and a skirt in bold black-and-white stripes that were interspersed with sweet buds. Other charming mixed-and-matched prints included her first exit, a draped dress that combined at least five patterns that managed not to clash.

Rebellion came in some of the tougher pieces, including distressed jacquard pants that were slashed all over. If at times the show seemed subdued, Miller made up for it with strong graphic touches via sequins and beads, including, for example, several looks with a glass shard pattern that read “kaleidoscope.”