A tranquil purity pervaded the runway as the designers channeled the chic subtlety that made their fall show so spectacular, in a very different direction. 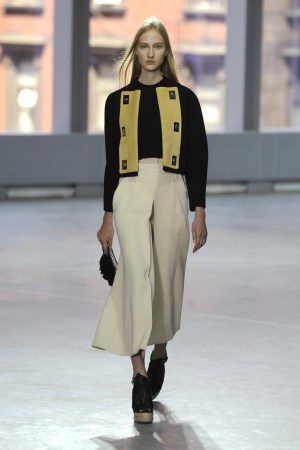 In some ways, the real preview of Lazaro Hernandez and Jack McCollough’s spring collection was in June with resort, their testing ground for new runway material. At the time, it was impossible to tell how the designers would crystallize a few new ideas they were playing with — neutrals, sunburst accordion pleats and a first attempt at draping — into this vision of calm, natural order.

A tranquil purity pervaded the runway as the designers channeled the chic subtlety that made their fall show so spectacular, in a very different direction. They worked under the influence of West Coast midcentury furniture designers and Arte Povera, the late Sixties movement based on simplicity and nature — two defining principles of this collection, particularly in the daywear. With a palette skewed earthy in shades of cream, navy, clay and yellow, Hernandez and McCollough’s opening silhouettes combined lean structure with rich materials (such as suede and crepe) that moved gracefully. Nothing was stiff. An ecru cotton crepe dress with a high neck and long, slim sleeves cut a clean line, and featured six precisely placed silver turnlocks on the chest. Every detail was measured but made to feel organic, such as the cotton crepe jackets and midlength culottes printed to look like the seams had been traced in paint strokes.

The cropped shirt-and-pleated-skirt combination introduced for resort was a highlight of the show. Now freed from the lovely-yet-commercial restraints of the pre-season, the languid silhouette shone as printed cloque dresses with shiny crisscross tops and accordion-pleated skirts that released into mixes of copper lamé, black and white. Slinky silk knit variations of the silhouette, here with long sleeves, were equally bewitching.