The lineup was surprising to a degree, but disappointing and perplexing, too. 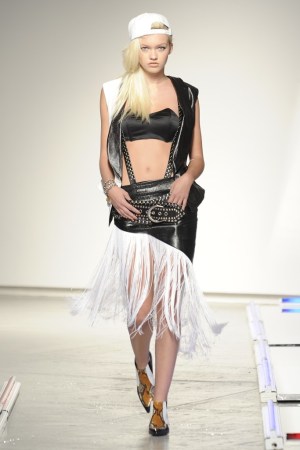 A preshow request to run backstage at Rodarte for a comment from the designers was denied because, according to house p.r., Kate and Laura Mulleavy wanted the collection to be a “surprise.”

Fair enough. The lineup was surprising to a degree, but disappointing and perplexing, too. What to make of leather biker vests, bustier tops and skirts cut on a sharp angle and trimmed in long white fringe?

For accessories, there were studded belts, backward baseball caps and padlock earrings to drive home the suggestion of a hard, gritty walk of life, which was clearly deliberate. But to what end?

“We wanted to do a collection based on Los Angeles, and that’s what came out, basically,” said Laura after the show. Could she be more specific, please? “In a weird way, it’s hard for us to explain the collection because we live [in L.A.],” continued Kate.

Even if the beaded, fringed bra top worn with ruffled denim micro shorts was a you-had-to-be-there — “there” being L.A. — thing, the collection failed to render the West Coast zeitgeist in a way that felt at all luxurious. Blazers in blown-out animal prints and angora sweaters, both bids for commercial viability, converged to a contemporary market norm. Some interesting, creative ideas, such as leather kilts and a black illusion dress embroidered with a scorpion, were overshadowed by the tawdry styling.

The path from pure editorial wonder to a more measured commercial reality is never easy, and the Mulleavys are clearly struggling to negotiate it. They seem intent on distancing themselves from the unbridled romance and extraordinary beauty of their early work in favor of ever-harsher territory. One wonders, why?

When they first explored the dark side of their aesthetic, they did so with breathtaking drama. Before they can truly move ahead, perhaps the Mulleavys should take a glance backward, and reconsider the work that fashion fell in love with in the first place.