Visually the clothes imparted a clear message of “a powerful woman,” as Sarah Burton said backstage, one who seemed divined from a warrior, even. 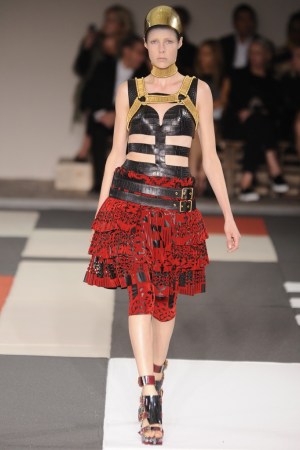 It doesn’t matter what the perceived theme of a collection is when the work is amazing, as it was in the case of Sarah Burton’s spring Alexander McQueen collection.

Visually the clothes imparted a clear message of “a powerful woman,” as Burton said backstage, one who seemed divined from a warrior, even, given the abundance of aggressive leather harness bras and knife-pleated red-and-black, laser-cut kilts that evolved into incredible, fierce feathered gowns evoking African tribal garb. The silver and gold helmets were a modern streamlined take on gladiator headgear, right?

Not really. “They’re sort of 1920s cloche hats,” said Burton, explaining that while gorgeous ladies of war had crossed her mind, her main reference point was “Mondrian and Picasso in the early 20th century.”

Lee Miller was name-checked. A straight line could be drawn from Mondrian to the red, white and black graphic patterns that lined the runway and had been hand-silkscreened onto the flocked leather of a cropped jacket with sloped shoulders and sharp kilt. Otherwise, a flapper reference versus a tribal goddess gown was in the eye of the beholder.

Certainly the collection harkened back to the harder, stricter side of Alexander McQueen’s aesthetic, which Burton has eschewed in favor of the more romantic. Here, she showed she can be as incisive with the tough stuff as McQueen.

The highly influential engineered patterns of Lee McQueen’s Plato’s Atlantis collection inspired Burton’s artistic graphics, which were crisp and dynamic yet retained the rich depth of hand-done technique. Blue, red and white were delivered in the boldly feminine silhouettes of strappy bra tops and flared skirts, the level of decoration escalating from beaded checker patterns to painted striped feathers to long, horsehair skirts.

The details were incredible, worked with such flourish as to project strength, raw sensuality and fragility that culminated in the grand finale: two long, lean looks — one gown, one a two-piece — beaded and threaded with feathers, with more feathers still exploding from the collars, busts and waistlines.