Karl Lagerfeld delivered a tour de force — he challenged his audience’s intellect, imagination and emotional core, and made it one big fashion party. 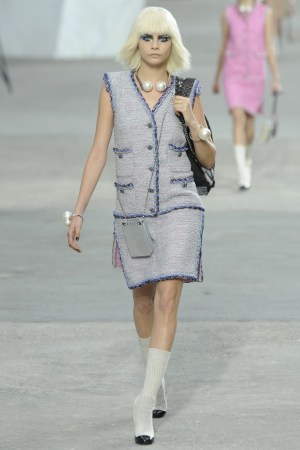 What is art? What is fashion? Do they make natural companions? Does the latter elevate itself by association with the former? All fodder for conversation and multiple opinions. One thing on which most of us would agree — even the haughtiest been-there-done-that, it-takes-a-lot-to-impress-me types among us — is what constitutes a major wow. Case in point: the tour de force Karl Lagerfeld delivered for Chanel, a show in which he challenged his audience’s intellect, imagination and emotional core, and made it one big fashion party. The communal takeaway — the joyful side of awe.

It started months ago as satire. “The idea came from people who overreact to art today. It’s all become a little too much,” Lagerfeld said during a preview, adding a quip to an imaginary colleague. “You’re an artist now? What, you don’t make dresses anymore?” Thus, he decided to address the ever-escalating fashion-art juggernaut. He started conceptualizing “artwork” — 75 pieces in all — turning his small-scale originals over to others to be realized on a huge scale (they had to fill the Grand Palais, after all). Some referenced Chanel obviously: interlocking Cs made of pearls that were falling off onto the floor; an image of Mademoiselle’s private atelier entrance; a Chanel No.5 Robot, and one of the naughtiest, “Modern Narcissus,” a life-size, 3-D nude (but for her socks) lounging on an elevated Plexiglas platform. Only by looking at the mirrored floor beneath her would one see the camellia placed strategically to cover her lady part. As is the way with most art, it spoke differently to different viewers. One piece featured a furniture series in ascending heights: a mat, a stool and two chairs. As per its title, most saw a riff on “The Evolution of Man.” One woman, an obvious acolyte of form following function, saw a surface on which to plunk her empty juice glass. A waiter’s quick action restored the work to its original state.

In keeping with the art motif, Lagerfeld based his lineup on vintage paint-swatch cards, which meant a runway alive with color. That was about the extent of the theme dressing, as the designer made his clothes as diverse, and as thrilling to look at, as his “art.” The ideas came at a rapid-fire pace, except for evening, which Lagerfeld ignored completely. “The red carpet is not fashion,” he said. “It is something else, but not fashion.” Yet there were some motifs to be extracted: two-paneled skirts with side zippers; wide-cut, paper-thin leather pants; shrunken sweaters worn as multiples, including as a neck scarf; shoes with attached ribbed socks, and endless surface revelry. This included painterly ombré grays, lavish tweeds (and embroideries masquerading as tweeds), plastic-painted lace, raffia braiding and on and on. And for those ladies who crave more still, how about a big, matching bag? More still? A lone, hunky guy posing as artist-in-residence chez Chanel.

Was it art? Stop it. Lagerfeld makes dresses and suits. Was it artful commerce? Do we have to ask?