“High summer feeling” and “airy opulence” were two of the show notes for Clare Waight Keller’s collection this season. 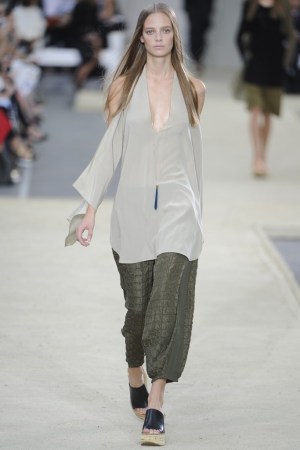 “High summer feeling” and “airy opulence” were two of the show notes for Clare Waight Keller’s Chloé collection this season. The designer elaborated on the descriptors backstage before the show: “I’m trying to create the sense of lightness and transparency. That modernity — just crisp and sharp.”

From her first exit — a sandy tunic top with khaki wafflelike silk pants — Waight Keller made another message clear: It’s going to be a breezy summer at Chloé. The proof came via her ultralight fabrics, especially the crushed plissé pleats that were everywhere. Most notable were the lovely Japanese poly-silk ones that, while superfine, allowed Waight Keller to experiment with volume and still maintain a relaxed feel.

Several of the languid dresses exuded sweet romance via the details. A chic blue silk cloque dress, for one, featured fabric tied around the arms in place of sleeves. As for her palette, the olive hues felt a bit drab — it’s hard to imagine them inspiring a day by the sea — but her blues were lovely and romantic. Particularly strong: the smocked patchwork jacquards used for a long, lean dress, and the medallion fils coupé looks that added an opulent depth.

Such richness was also evoked in the set — striking gold-disc light installations shaped like the sun and casting a warm light onto the runway.