The designer showed chic shirtdresses in multiple variations, from short to long, strictly tailored to relaxed. 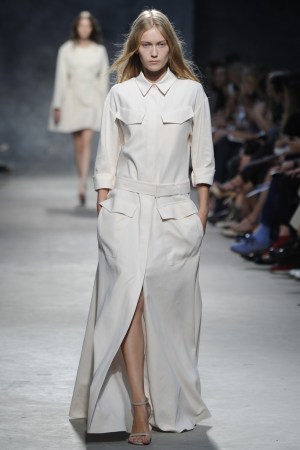 The first few strings of music evoked a Berber vibe — not surprising, considering Felipe Oliveira Baptista’s “The Sheltering Sky” theme, which references Paul Bowles’ novel about two Americans’ North African travels and travails. What followed, however, wasn’t an homage to Bedouin chic. Instead Baptista riffed on the inspiration more subtly, mostly via chic takes on the shirtdress (which is proving to be a key silhouette this season). The designer had them in multiple variations, from short to long, strictly tailored to relaxed.

The Morocco influence was most evident in a voluminous floor-length look that resembled a loose caftan — think modern-day Talitha Getty — as well as Baptista’s beautiful shade of blue inspired by the deep color of Marrakech’s famed Majorelle Garden.