Olga Sorokina winked at the past via fashion boy Harry Brant, who marvelously impersonated Felix Yusupov, the Russian nobleman who founded the house in 1924. 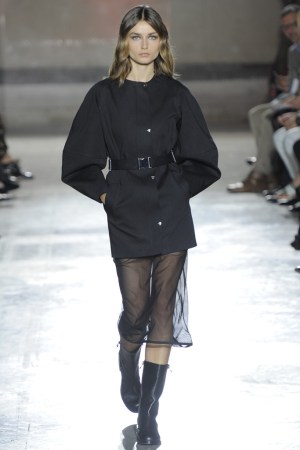 In her debut ready-to-wear collection for Irfé, Olga Sorokina winked at the past via golden fashion boy Harry Brant, who marvelously impersonated Felix Yusupov, the Russian nobleman who founded the house with wife Irina Romanov in 1924.

Irfé shuttered in 1931, but Sorokina, who is also its new owner, has set her mind on infusing the brand with a contemporary aesthetic.

Enter the punk accents. A series of mesh tops, constructed from an exclusive silicone-and-cotton fabric, added a grungy note to otherwise dressy looks, made of tailored pants, flouncy skirts and dresses. Among the stronger pieces was a semitransparent blouson jacket, its front worked as a tuxedo shirt for an effect that was both chic and carefree.

“It’s a wardrobe for a fashionista,” Sorokina said backstage. “The idea was to be modern, as if the fashion house never stopped.” While it was a solid first effort for Sorokina, some of her clothes seemed too familiar. To revive this historic brand, she now needs to hone her own aesthetic.