Marc Jacobs punctuated his brilliant tenure, one that transformed the house from stodgy giant to fashion marvel with a dark-side-of-Busby-Berkeley extravaganza. 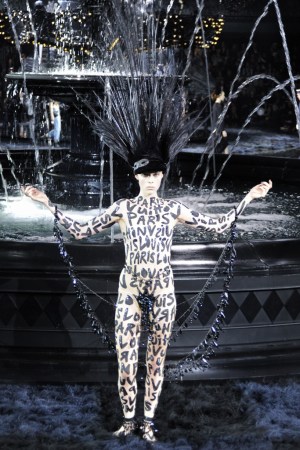 A true showman lives by the mantra, through to the end of his run. On Wednesday morning Marc Jacobs punctuated his brilliant tenure at Louis Vuitton, one that transformed the house from stodgy giant to fashion marvel with a dark-side-of-Busby-Berkeley extravaganza. It razzled, dazzled and captivated his audience.

At a preview on Tuesday night, the soundtrack from “Chicago” played as Jacobs did fittings and approved yet-to-be-assembled embroideries. Stephen Jones tended to a model’s giant feathered headdress that channeled Cher and every unknown glamazon of the Folies Bergère. Jacobs said the show was about “the showgirl in all of us,” and dedicated it to an extensive list of women he loves and finds inspirational, from stylist Katie Grand to longtime friend Sofia Coppola to icons of audacity: Liza Minnelli, Lady Gaga, Madonna.

It was dedicated, too, to the city of Paris, specifically those parts of it that are “decorative — superficial in a sense,” Jacobs said. “Because it’s perfectly honest and normal to have deep feelings about something that just takes your eye. And new is what you do next, it’s not anything else.”

Though Jacobs maintained he hadn’t designed the show as a goodbye, it certainly felt like one, its set a provocative pastiche of references to his Vuitton past — elevators, escalators, hotel corridor — all coalesced into one lyrically decadent whole. Even a whiff of feisty spring 2013, muscled in via the dark navy-and-black Mongolian lamb damier, though one had to wait until the lights went up postshow to notice that.

That’s because everything was black. Some saw an elegy, though Jacobs denied such intent and reasonably so, given the wit, sexiness, even subtle humor he poured into the darkness.

The showgirl parade astounded, Jacobs’ bravado and the atelier’s craftsmanship on sensual display. And for all of the sheer tulled, feathered and beaded goddesses, there were spectacular clothes. A motorcycle jacket made of appliquéd, studded ostrich. Tuxedo trousers with plumed side stripes. Shirred mink dresses with jeweled inserts. Jeans with windows of decorated tulle. Embroideries for days. Glamour gowns sprung from Victorian pathos.

Starting it all off: Edie Campbell, dressed only in Stephen Sprouse graffiti. It was as if Jacobs were saying, “I’ve given it my all, and it stays here.”

Even as it closed the curtain on Jacobs’ Vuitton, this show marked the end of a larger era, that heady moment of pan-fashion reinvention that started in the mid-Nineties. Tom Ford was in high heat at Gucci; John Galliano took his enchantment to Dior, opening Givenchy for Alexander McQueen; and a pair of American upstarts, Michael Kors and Jacobs, became two house designers. Jacobs was the last remaining of that generation of industry-altering hires, and leaves with his work more potent than ever.

The show started exactly at 10, when the clock (train show, fall 2012) hanging between the two escalators started to tick — backwards. Mere ruse? Perhaps. Or maybe it signaled that after years of fabulous fashion on two continents, Jacobs and Robert Duffy are going back to the singular focus with which they started. Next goal: the IPO.