No designer may ever again stage an “urban jungle” fashion show so literally — and so rambunctiously. 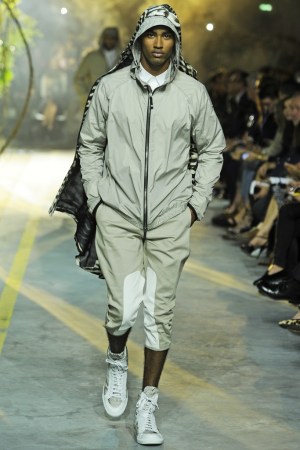 Can Giambattista Valli work a theme? Does Moncler make down jackets? No designer may ever again stage an “urban jungle” fashion show so literally — and so rambunctiously.

For once, the steamy Couvent des Cordeliers venue made sense with Valli’s set of dangling rain-forest greenery. (Dior’s seems a distant memory now, so no biggie.) Above it were flashing siren lights; below, pavement. Are you getting the picture?

There were clues in the clothes. Summer parkas, T-shirts and shift dresses came in panels of athletic mesh and animal prints — fluffed here with feathers, slicked there with nylon in asphalt black or safety-jacket orange. The men wore oversize anoraks and shorts that sometimes read safari, sometimes the basketball court.

The pacing gave other hints, too: first a herd of giraffe, zebra and python prints (the latter sometimes rendered as intricate quilting); then an interlude of shirtless teens whizzing by on skateboards.

For those too weary from the international marathon of fashion shows, the last riders on the runway were two men in gorilla suits. Urban jungle, get it?