For his debut as creative director, Julien Dossena evoked lots of intriguing characters — all of them young and seeking cool. 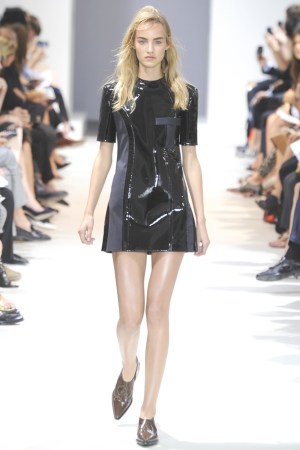 Space nurses. Space surgeons. Tough college girls. For his debut as creative director of Paco Rabanne, Julien Dossena evoked lots of intriguing characters — all of them young and seeking cool.

The show had a familiar futuristic gloss, hardly surprising given that Dossena was a senior designer in the Balenciaga studio, working closely with former creative director Nicolas Ghesquière. Members of the Ghesquière gang, including stylist Marie-Amélie Sauvé and shoe guru Pierre Hardy, were all there to cheer Dossena on alongside bigwigs from Puig, which owns Rabanne.

To his credit, Dossena wisely dialed down the Sixties — Rabanne’s heyday — and etched the metal-dress legacy lightly, putting mesh athletic tank tops under unzipped scuba dresses and streaking pristine surgical scrubs with thin strips of metallic leather. While not revolutionary, everything was short and sharp, from kinky T-shirt dresses in varnished leather that had the allure of Latex to jutting miniskirts in sturdy army-green cotton.

The designer sought to show his range, parading sharp tailoring in stiff micro houndstooth fabrics, and ticking off all the streetwear influences: sports, military, uniforms. Dossena seems keen to lend his voice to the season’s youthquake.