McCartney characterized the collection she showed on Monday as one of “understated seduction” — and she delivered the mood beautifully. 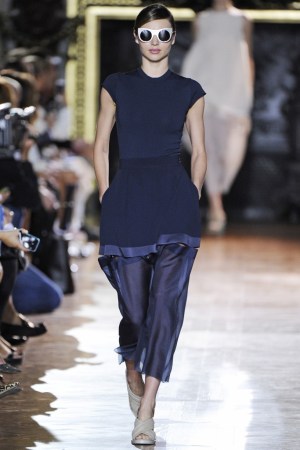 At a fancy wedding in Wainscott, N.Y., this summer, one guest wore a Stella McCartney spring 2013 dress in bright orange plissé played against sheer white organza. The young woman looked spectacular; she stood out among the glamorous crowd even as she fit in among its chic demographic.

That dichotomy — stand out/fit in — is something of a McCartney special, particularly when she moves from the essential tailoring portion of her work into its more dressed-up side. A fierce practicality drives her approach but does not restrain her from incorporating those flourishes that make people stop and look without making the wearer appear ridiculous outside of the narrowest realm of fashion.

McCartney characterized the collection she showed on Monday as one of “understated seduction.” She delivered the mood beautifully. It came most obviously in two variations, both reliant on degrees of transparency. Stunning dresses played satin on top against organza skirts, the halves tacked together at intervals, providing discreet glimpses of skin. One was a navy strapless, the other, a wide, white egg shape flamboyant in its simplicity. Then there were beautifully engineered lingerie dresses in combinations of lace and silks, their fragility belied by their racer-back constructions.

Yet the McCartney woman doesn’t live by lacy lovelies alone; her day-to-day requires more substantive fare. If a croc jacquard felt out of sync, McCartney’s sophisticated shapes and silver-and-black treatment made sultry stuff of a daisy motif. As for the tailoring, the designer reigned in the proportions of her signature slouchy looks, while keeping other silhouettes overtly sleek — short, trim jackets and slim trousers with zipper details — for a mood of refined raciness.