The “New Avengers”-style bobs on every model made the designer’s spring message clear — she was channeling London in the Swinging Sixties. 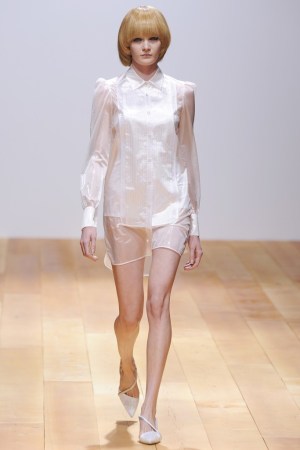 The “New Avengers”-style bobs on every model made Veronique Branquinho’s spring message clear — she was channeling London in the Swinging Sixties, with Purdey and Austin Powers references in abundance.

The designer executed the theme with ultrashort silhouettes and a contemporary touch — shifts and shirtdresses worked in sparkly Lurex, subtly transparent to suggest the bustier bodysuits underneath.

She ended the show with a strong parade of crisp looks based on the white shirt — a savvy move, considering it’s a key trend this season.