Hedi Slimane continued his celebration of the rich rock chick, but with the grunge babies rotated out and Eighties party girls rotated in. 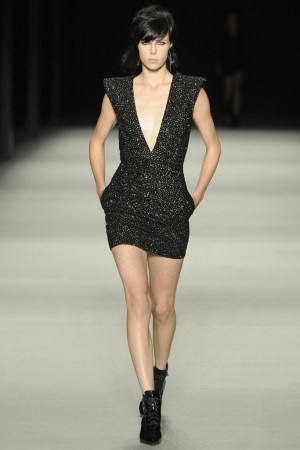 What is Hedi Slimane all about at Saint Laurent? Three seasons in, it remains something of a mystery.

On Monday night, Slimane continued his celebration of the rich rock chick, one still steeped in interpretations of YSL’s renowned tailoring, but with the grunge babies rotated out and Eighties party girls rotated in. None, by the way, looked particularly expensively dressed, despite the inclusion of some no-doubt pricy fabrics. Which may have been intentional.

This season, a long-percolating runway dichotomy has intensified. On one hand, we’ve seen the elevation of a contemporary attitude to designer prices, the goal of which may be to make designer clothes relevant to increasingly casual lifestyles. (There’s been a lot of that going around.)

On the other hand, some designers have upped their creative ante with highly developed, experimental fabrics and shapes. These types argue that the escalating success of the pre-collections allows for greater daring during the runway seasons.

Intentionally or otherwise, Slimane has positioned himself in the former camp. On one level — some would argue soundly, the only one that really matters — it’s working brilliantly. Major retailers say the line is magic, while word is the brand’s own store business is the envy of many a competitor. The alchemy must be in the pieces: the leather jackets and skinny pants that have already become signatures, now joined for spring by Slimane’s skirt of the season (short, tight, black, leather) and any number of retro sexpot dresses, a Mugler shoulder here, a flying buttress shoulder there.

However, not to go all high-horse artful, but is it fashion? Can something be considered real fashion if its sole purpose is to entice with the familiar rather than to challenge, at least a little? Is a designer doing his or her job to the fullest when creativity ends rather than begins with appropriation?

Even if the answer to those questions is yes, is that the kind of fashion we want from a) the high-end designer runway in general, and b) one of the most revered names in the fashion directory? The discussion is open.