For his Japan fashion week debut, South Korean-born designer Bajowoo showed a punk-influenced collection that was heavy on leather. 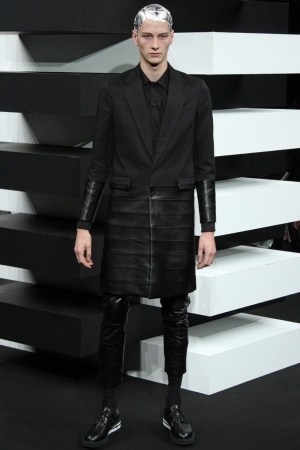 For his Japan Fashion Week debut, South Korean-born designer Bajowoo showed a punk-influenced men’s collection that was heavy on leather, using it for motorcycle jackets, slim cropped pants, boxy T-shirts and loosely tailored coats. After an initial series of all-black looks, he moved into a black-and-white striped group with pops of silver. Hardware was also featured prominently, with chunky zippers and snaps shown on everything from trousers and jackets to pleated skirtlike aprons attached to the hips of pants.