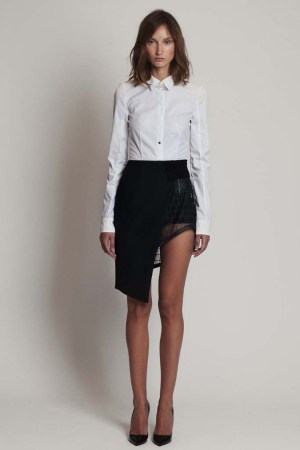 “She’s worldly, polished, intentioned. She’s the boss,” said Mathieu Mirano of his eternal woman. For spring, the young designer’s vision was nowhere more apparent than in a series of laser-cut leather separates, which lent his impressive, versatile lineup the sexy and sophisticated edge he’s becoming known for. On the softer side of the range was a series of white dresses, like a stretch-twill cocktail number that delivered a modernized take on the peplum and a hand-drawn floral gazar gown for evening. Standouts fused both soft and hard elements, particularly one red-carpet-worthy look that featured an iridescent, beaded bodice — inspired by coral in the Caribbean and, Mirano said, about nine layers thick — paired with a straight black skirt featuring lattice leather detailing. Meanwhile, a couple of safari dresses — a short, daytime version in white crinkle chiffon and a long version in black with a pop of red — were more wearable for the everyday woman.