For her solo debut at London Fashion Week, the designer looked at Sixties style via the Age of Aquarius. 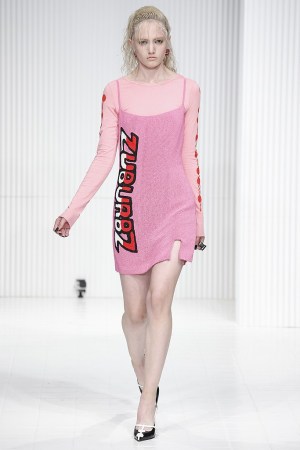 For her solo debut at London Fashion Week, Ashley Williams, previously a member of London’s Fashion East talent incubator, looked at Sixties style via the Age of Aquarius. In particular, the designer was inspired by the revolutionary spirit of the era, which also saw the emergence of a culture mixing Western and Eastern influences.

These references translated into her playful lineup combining Pop elements — such as comic-inspired graphics appearing on feminine cami dresses, or  the image of a can of Coke peppering a sweater — with retro silhouettes exuding an Asian feel. The latter included mini frocks which, while evoking traditional Chinese dresses, were decorated with rubber details.