Marjan Pejoski reclaimed the classic cameo and reworked it in a strong collection that recalled Eighties power dressing. 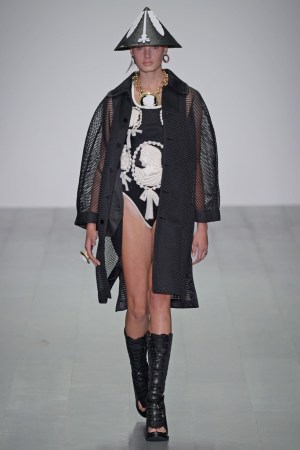 Citing the work of Josiah Wedgwood as one of his inspirations, Marjan Pejoski reclaimed the classic cameo and reworked it in appliqué, lace and embroidery in a strong collection that recalled Eighties power dressing.

Though some elements were costumey, the outing had broad appeal. A black sheath dress covered in big white appliquéd cameos wouldn’t be out of place on the red carpet, while the poufy white organza dress featuring an image of the ancient warrior queen Boadicea in gold sequins was made for a pop star.

Inexplicably, midway through, the show went on a reptilian tangent, with a group of seven fierce, black croc-embossed leather looks that had 3-D plastic spines placed to give the impression of a crocodile’s back. Or maybe it was just a test to see if the audience was paying attention.