A theme of “light,” though abstracted, guided Andrea Incontri for spring. 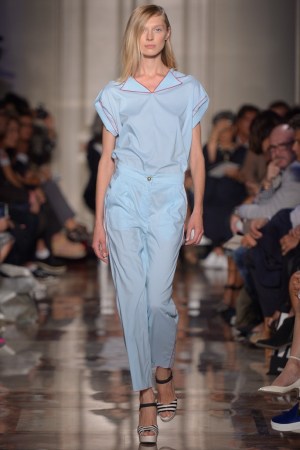 A theme of “light,” though abstracted, guided Andrea Incontri for spring. More specifically, the designer looked to “infinite galaxies, iridescent constellations that speak of distant worlds, psychedelic visions and kaleidoscope explosions,” as stated in the show notes. If it sounds like a heady mix, it was. Make that dizzying, actually.

Incontri, an emerging name in Italian men’s wear, went in several directions for his women’s lineup.  He started with crisp tops teamed with casual, cropped pants, then veered into disco territory via meshlike silver embellishments graphically placed on a tunic top shown over languid pajama pants. Colorful prints and futuristic touches added to the lineup’s cacophony.

The better looks demonstrated a measure of restraint, including, for example, the white fil coupe dot blouse with a crystal-adorned wrap miniskirt.