His spring show was another stunner, inspired by a long admiration for nonagenarian Italian artist Carol Rama. 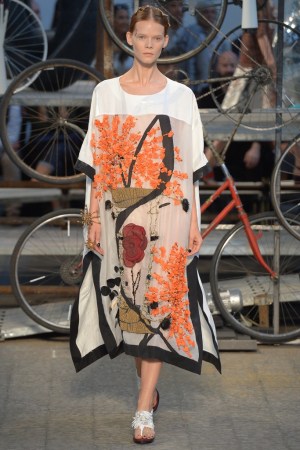 The narratives Antonio Marras unfurls in his fashion collections are deeply personal, meticulously executed — and a rare treat in Milan.

His spring show was another stunner, inspired by a long admiration for nonagenarian Italian artist Carol Rama, whose sexually charged and autobiographical works often invite comparisons to Louise Bourgeois.

Linen caftans, roomy coats and dirndls became canvases for hand-drawn prints resembling Rama’s watercolors, minus the overt eroticism and plus dense 3-D starburst embroideries. Some exits were extremely busy, incorporating loud chintz, bold stripes and bursts of sparkly decorations. Yet there’s a homespun character to Marras’ clothes that reads as eccentric rather than overtly loud.

Colors were similarly intense. Blue and orange shouldn’t work as a color combination, and your instinct is to reject it on striped silk coats and color-blocked evening gowns. But then you remember what makes sunrises and sunsets so compelling.

The second half of the show was less heavy-handed, when Marras segued into filmier fabrics, melding polka-dot organdy, pleated chiffon and lace into mesmerizing multi-paneled skirts and gowns.

For the finale, models assembled under scaffolding rigged with rotating bicycle tires and spindly hands, motifs integral to Rama’s art and props that punctuated a transporting show.