Pablo Coppola was inspired by French and Swiss modernist architects and designers. 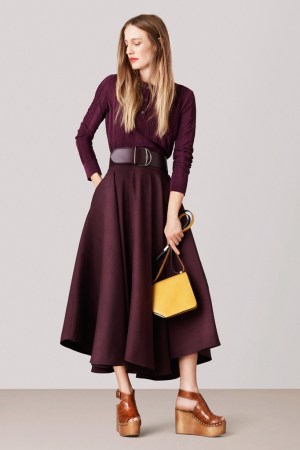 Pablo Coppola is settling in nicely at Bally. For his second collection, the house’s design director was inspired by French and Swiss modernist architects and designers — the subject of a traveling art exhibition that Bally unveiled at Art Basel.

Pierre Jeanneret chairs were dotted throughout the showroom — an apt backdrop to the Fifties influences, which included glossy leather circle skirts and a cherry-colored crocodile biker jacket. The skirts also came in silk canvas, playing into Coppola’s idea of blending elements from different eras.

“We were looking at different periods, but actually the idea is to mix it all together and not have so many rules,” he said, noting that the line consists of just 15 looks, which are available in a variety of materials.

Thus, a sleeveless shift came in python for day — worn with a Sixties-influenced sandal with a cube heel — or in black-silk canvas for night, dressed up with peep-toe high heels with an ultraslim ankle strap. Python over-the-knee boots were paired with a caramel-leather miniskirt and a crisp white oxford shirt.

There were plenty of flats on offer, too, from Swiss moccasins in pink, cherry or python to patchwork sneakers. Bag highlights included new versions of the Gentlewoman, which has one of its corners cut in reference to the gentleman’s corner seen on Bally dress shoes. It now comes in five sizes, including a clutch.

It all amounted to the kind of low-key, effortlessly cool style that confirms the buzz around Coppola’s revival of the brand.